After 27 years of service, Foundation Plant Services’ (FPS) Director and Cooperative Extension Specialist, Dr. Deborah Golino will retire on July 1, 2021. Since 1994, Dr. Golino has been the Director of FPS, a self-supporting service unit in the College of Agricultural and Environmental Sciences at University of California, Davis. FPS is dedicated to the distribution of disease-tested, true-to-identity plant materials with programs for grapes, strawberries, fruit trees, nut trees, sweet potatoes, and roses.

Dr. Golino began her professional career in Riverside, California, where she worked for the USDA-ARS at Boyden Entomology Laboratory, specializing in research on insect-transmitted diseases of citrus. After completing her PhD dissertation "Characterization of the beet leafhopper transmitted virescence agent, a mycoplasma-like organism" in 1987, she joined the University of California, Davis as Research Plant Pathologist, USDA-ARS in the Department of Plant Pathology specializing in grapevine virology and served on the committee overseeing what was then called Foundation Plant Materials Service (FPMS) and would become FPS.

In 1994, Deborah was selected as the founding FPS Director which was an Academic Administrator title with a 30% Cooperative Extension Specialist assignment in the Department of Plant Pathology. The split assignment enabled her to continue her research efforts as well as organize and present many popular Cooperative Extension classes and seminars. One of the most popular classes with winemakers and viticulturalists throughout California and the United States was a series of day long seminars that focused on a specific grape cultivar for which she brought in world-renowned experts and included wine tastings. For many years, Deborah has also offered two popular Extension courses through UC Davis Continuing and Professional Education on an annual basis. 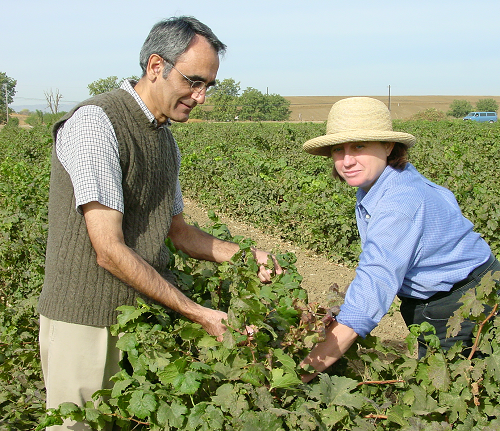 Adib Rowhani reading the grape index with Deborah Golino in 2001

In 1992, FPS had eight employees with programs in several fruit and nut crop species, grapes, strawberry, and roses. In September 1994, FPS moved into the new National Grape Importation and Clean Stock Facility, a state-of-the-art building funded by a combination of federal, state and industry support. The new facility allowed expansion of existing services and space to conduct research to improve disease detection and elimination. Under Deborah’s leadership FPS and its programs have grown considerably. She revived the grape importation program that was dormant for several years. This was something the industry requested and was considered of high importance when she came to Davis. Currently, the FPS grape collection serves as the source of all material for the California Grapevine Registration & Certification Program and has grown to over 900 cultivars. It represents a great diversity of grape plant material and highly sought-after foreign selections progressed through quarantine as FPS is the largest grape importation facility in the United States.

Early in Deborah’s career as director, the UCB#1 pistachio seed production operation was transferred to FPS and now also includes cultivars developed through the UC Pistachio Breeding Program. The sweet potato clean stock program was also added and is the west coast source for virus-tested sweet potato stock. As an avid gardener, Deborah has a special interest in roses. She has greatly advanced the rose program which has grown from 365 to more than 800 rose scion and eight understock cultivars. It is the largest public collection of virus-tested roses in the United States and is an important resource for nurseries and growers throughout the country.

In 2012, FPS supporters celebrated the dedication of the Trinchero Family Estates Building that offered a conference room for FPS industry meetings as well as much needed space for expanding programs and technology. With programs now in fruit and nut trees (Prunus spp., pome fruit, pistachios, and olives), grapes, strawberries, roses and sweet potatoes, FPS has 45 employees and maintains over 100 acres of grapevines, roses, and trees for the benefit of the respective industries. The research and service programs Deborah has managed at FPS have played a key national and international role in improved methods of pathogen detection, streamlining virus elimination techniques for clean stock and quarantine programs, and distributing new crop varieties and healthy planting stocks.

Deborah’s leadership role in the National Clean Plant Network (NCPN), established in 2008, make her a leading advocate for clean plant use and the technologies and research used for clean plant production. She was instrumental in the formation of the NCPN and served as Chair of the NCPN-Grapes Committee from its inception. FPS has served as an important contact point for outreach efforts to provide information about our crops and has maintained regular contact with nurseries, growers, consultants, and regulatory stakeholders. Deborah is one of the top grape research and extension administrators in the country.

In retirement, Deborah hopes to spend a great deal of time in her garden, with her grandchildren, and traveling with her husband, Dick Hoenisch.

We thank Deborah for her many years of dedication to the crop industries that she has helped advance through her research, outreach, and service. FPS staff is especially grateful to Deborah for her guidance, leadership, and thoughtful expansion of FPS programs over the years. FPS will hold a retirement celebration for Deborah in the fall.